From margins to mainstream

From margins to mainstream

Story of a crorepati SHG member

Travelling back and meeting up with SHGs formed in the pilot phase of the SHG-Bank Linkage Programme in 1992 has been an avowed desire for many of us in the microcredit Department of NABARD. Our internal discussions then often ending up stating that SHGs are not eternal beings…., the poor and unbanked came together to gain access to banks and they would disperse / disintegrate once they become creditworthy individuals when they have enough assets to provide collaterals directly to banks. Of late many discussions also centred on group fatigue in SHG members with too much drag on time for ensuring continuance in SHGs, especially when fast track microfinance models are available. This write up is about one of the pioneering SHG and it members formed before the pilot phase in 1992. For me it was a chance meeting when I met up with Board members of a CMRC (Community Managed Resource Centre formed by MYRADA -one of the pioneering NGO in the field) who had come over to NABFINS Head Office for renewal of the Business & Development Correspondent partnership agreement with NABFINS.

Meeting up with the Board members of CMRC was a great learning exercise for me. One of the Board members Ms Lakshamma insisted that the group had opened a bank account in 1990’s; while I clarified that the account opening of SHGs in Banks started by 1992 only, after the pilot project was started by NABARD in 1992. Lakshamma insisted that the account was opened in July 1990. In fact she was correct, which I learnt during my visit to the SHG, they had managed to open a “Mahilar Sangha” saving account on 23 July 1990 at the Kelamangalam branch of Indian Bank under an IFAD supported project (Picture 1). This Mahilar Sangha was a group with 32 women members, who pooled their savings and kept in the bank and withdrew money for internal lending.

The nuances and norms of the SHG mode of Bank linkage were yet to be drawn in the 1990. Ms Lakshamma was one of the members of this Mahilar Sangha took her first internal loan in June 1991 for Rs 1000 for ground nut business for six months however, repaid the same in full in five months (Picture 2). However, the formal functioning of the SHG started in the mid 1990’s after the SHG norms were set and the group members numbering 32 were formed into two SHGs of 16 members each named Jhansi Rani SHG and Sharada SHG. 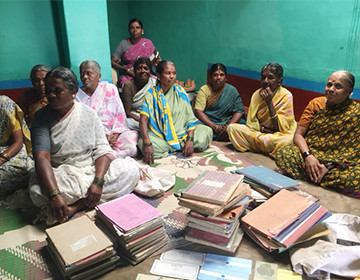 Lakshamma, continued in the Jhansi Rani SHG with 16 members. Reflecting on the 25 years journey, she stated that the group members still continue with their weekly meeting and derive pleasure in meeting up regularly. The group which started with Rs 2-4 per member/ week in 1990, now saves Rs 100 per member/ week. The group also allows to capture surplus savings to the tune of Rs.200 per member. Many group members stated they had the wherewithal to save larger sums , but restricted it to Rs 200/member/week as dividend distribution and pay outs gets complicated. The group with a savings of over Rs Four lakhs still provides internal loans at 2 % per month to its needy members. The group follows the practice of dividing profits and savings at five yearly intervals. This is termed as dividend distribution and members have received dividend pay outs of Rs one lakh each time. In these 25 years the group has lost 2 of its members who passed away, but have been joined by other members of the family. 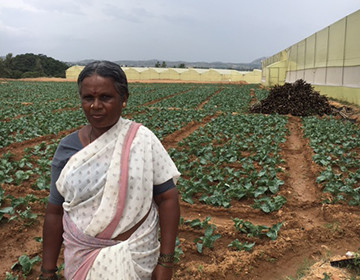 The SHG that stated with one book in the early 1990’s maintains 7 books now as prescribed by CMRC, documenting all details of savings, loans, resolutions etc. Since the early 1990’s Lakshamma’s house been the meeting point for all group members. The SHG has saved all the books over the years and have few box cartons full of used books and 17 passbooks from banks (Picture 3). The group having spent close to 6000 hours in attending 2700 odd SHG level meeting over the years, they showed no signs of “group fatigue”, they seem to cherish the “sense of togetherness”. Every member of the SHG is in the late 50’s or early 60’s continued to cherish those weekly meetings, chats and even continuing to save and borrow from the group. But, the purpose of this story is not Jhansi Rani SHG, but its leader Ms Lakshamma. Having been with a SHG for over 25 years; Lakshamma had availed loans about 15 times. Starting with loans for groundnut business for an amount of Rs 1000 from SHGs in 1990, she went on acquiring assets and making investments, like milch animals, purchasing household assets, remodelling her house, educating her children, purchasing agricultural land and lastly for establishing a high tech protected cultivation (Rs 1 crore loan from a Bank in 2015 )…thus, she has seen it all. She proudly walked us around the agriculture land she had acquired gradually acre by acre over the years, starting from 1 acre in 2001 funded with SHG loan and her SHG level saving. Today she is a proud owner of 12 acres of land (9 acres under open cultivation) and 3 acres under protected cultivation (Picture 4). Under the protected cultivation Lakshamma grows capsicum (2 season) which fetches her about 4-5 tonnes per week. With a proper fixed price contract with traders at the farm gate at Rs 40 / kg she fetches about Rs 1.6 to 2 lakh per week (Picture 5). Thus, through the years she had firmly established her credit history in the group when “Credit Bureaus” hardly existed.

For availing the Rs 1 crore loan from a commercial bank she would have needed the support of her family to mortgage the land, complete the formalities in the bank, avail the NHM subsidy, ensure market tie ups etc. Nonetheless, she truly is a self-driven entrepreneur, eyeing every opportunity, making the right investments and above all remaining focused. We could call her tech-entrepreneur or agri-entrepreneur establishing a reasonably state of the art high-tech farm with foggers, fertigation et al. In this jobless economy, she employs about 10 wage earners and also her son who is an MBA from MGR University.

Most of the acquisitions and proud possessions of Lakshamma has been funded with loans from SHGs (facilitated through linkages Sangamithra (an mFI) and/or NABFINS) coupled with savings accumulated with SHG. Thus, the SHG model reinforces the fact that debt alone cannot pull you out of penury and saving forms a critical lifeline in microfinance programme. Poor often used a combination of savings and micro debt to fund acquisition of assets and also fulfil lifecycle needs. It is also clear message to (microFinance) policy makers that policy making is not “black or white” it is an “art and craft” as Dr Subba Rao, Ex-RBI Governor once said.
One question that ran in my mind, was there only one Lakshamma in the group? To my surprise there were atleast 4 SHG members who had started protected cultivation though on a much smaller scale (just a quarter of an acre) and making investments close to Rs 10 Lakh. The very push for any enterprise (by the less resourceful) in any economy is sparked by the thirst to succeed, resilience to fight odds, adversities and daring to dream. But, this doesn’t come easy for them. SHG and its peer familiarity, its resourcefulness, chip in as learning platforms, and serve as true enterprise incubators for the poor.
A young officer of NABFINS accompanying me in this trip stated “Sir, I should have done my internship here, I would have learned more”…. It truly is a fact; there are limitless opportunities to learn from the poor and their resilience. Lakshamma and her co-members are the noiseless and little known “start-up entrepreneurs” or agriprenuers of the country employing the educated and jobless, millennials. This is rightly the little known “Start-up India”…and also fits the slogan “make in India” or make for India too.

“Don’t let the noise of other’s opinions drown out your own inner voice. And most importantly, have the courage to follow your heart and intuition. They somehow already know what you truly want to become. Everything else is secondary.”